This post is part of the August 2015 Synchroblog on “What it means to be pro-life.” The writing prompt included the following quote from Sister Joan Chittister, OSB: “I do not believe that just because you’re opposed to abortion, that that makes you pro-life. In fact, I think in many cases, your morality is deeply lacking if all you want is a child born but not a child fed, not a child educated, not a child housed. And why would I think that you don’t? Because you don’t want any tax money to go there. That’s not pro-life. That’s pro-birth. We need a much broader conversation on what the morality of pro-life is.” 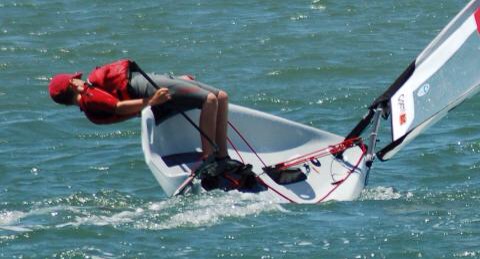 Opposing abortion but turning a blind eye to the child once he’s born is not a balanced way to love your neighbor. That said, the imbalance on display is the same kind of imbalance you see in a sailor leaning off the high side of the boat for all he’s worth, trying to keep it from going over. The legal slaughter of a couple thousand children every day is the sort of thing that might send you off-center, if you think about it. Molech never had it so good; for Yahweh-fearing vertebrates, single-issue voting is an astonishingly mild response. What would Phineas do?

But a bunch of us want to talk about subsidized school lunches, early reading programs, and clean water in the third world — not so much because we are pro-life all the way through as because we’re tired of being uncool. [EDIT: The notable lack of participation in this month’s Synchroblog is a case in point. Compare it to August last year, or the ‘cooler’ topics — it’s painfully obvious that a bunch of us just found this one too hot to touch.] All the cool kids still think it’s better to keep the slaughter legal, and we’re tired of sitting at the nerds’ table. And the thing is, we don’t even have to give up our private pro-life convictions to change seats — all we have to do is not talk about it. Talk about Head Start, STEM education for girls, ethical coffee farming — anything but abortion.

Why? Because we are winning the war of definition. It used to be impossible to say that abortion is killing a baby without my hardcore pro-choice friends going off like Mount Vesuvius, but not anymore. I can say so out loud and in public and get away with it — as a man, yet! That was definitely not true even ten years ago. Even at the cool kids’ table, you can win that argument. You might struggle to get anyone to engage in the conversation, but if you have any spine at all, you’re not going to lose.

So as we engage the broader conversation of what it means to be pro-life, we need to build on the very effective and clear foundation that we have laid. We need to be masters of good and necessary consequence. We should take every opportunity to drive Sister Chittister’s reasoning to its conclusions. If we are in favor of saving that baby in utero, then we can’t balk at feeding the kid, or teaching him to read. We’re pro-life. And on the other hand, if you’re such a big fan of WIC that you’re willing to send IRS agents armed with home liens to collect the funding, then how in the world could you have been okay with flushing the kid just months before? Or put the other way round, if you were fine with killing him in utero, then why in the world do you care if we flush him now, at age 5, when it’s clear that he isn’t keeping up with the pack? Back then we were only guessing that he’d get left behind; now we know….

We should be sharpening the antithesis at every turn. The merchants of death who suddenly get religion about caring for children once they pass through the birth canal must be called to follow their visceral convictions about the value of newborns to the necessary conclusion. (Which, in case you missed it, is that Jesus is King and He built us to know the value of every life, including the ones who aren’t born yet.)

It is equally vital that the broader conversation focus on actual results, not just good intentions. We’re more than willing to hold the pro-life movement to this standard.

“Don’t be ridiculous,” they say, “of course we love children after they’re born.”

And if all their money goes into fighting abortion at the opportunity cost of early literacy programs, if their intentions for the young children are professedly good but the results just aren’t there, then we will call them hypocrites — as Sister Chittister did.

But that leverage needs to get applied on the other side of the fence as well, and Sister Chittister’s statement sparkles with irony coming, as it does, from a Roman Catholic nun. She surely knows that privately funded programs (like the ones the Church runs all over the world) produce much better results than the expensive and ineffective tax-funded programs she wants us all to endorse. I am not quite prepared to believe that I can’t really be pro-life unless I’m willing to sign off on an extensive set of interventions administered by the same set of jokers that brought us the DMV.

Yes, yes, the intentions are good. We all feel ourselves very virtuous voting a bunch of public funding into something for the children. But remember, we are building on the foundation of the abortion conversation, and one of the key lessons is that results matter more than intentions. The mother may believe the hype about a lump of tissue, and have no intention of killing a baby. But if she goes through with the abortion, the baby is just as dead as if she’d given birth and then smothered it with a pillow. The actual results are what matter, and that doesn’t change after the child passes through the birth canal. So let’s not be idiots. Intentions don’t feed a kid or teach him to read — and neither does voting.

So I work with a community church that hosts a weekly food bank — not just dry goods, but fruit, vegetables, meat, and dairy, too. Beyond that, we have a drop-in youth center 3 days a week (we want to do every day, but we don’t have the volunteer base for it yet), and we have a little “coffee shop” area that’s open anytime we’re in the building. Come calling anytime, and if someone’s there, you’re welcome to come in out of the weather, have a seat, and get a cup of cold water or hot coffee, as the whim takes you.

Is it working? Some of it, yes. The youth center is going gangbusters. The day care is great. The medical clinic catches problems that would become ER cases left untreated, and treats them while they’re easy and cheap to treat. That saves our local homeless population an incalculable amount of human suffering. The food banks, though….

You can’t starve in this town if you get sick and can’t go to work. The food banks furnish a safety net to folks who hit a run of bad luck, and that’s great. Some of our clients have taken advantage of the safety net when they needed it, and then gotten back up on their feet. Some others, instead of being empowered and encouraged, have become permanently dependent on us. That was never the goal, and we need to do better by them. Human dignity thrives when we are able to be generous, not when we are continually dependent on the generosity of others. We have a population that we have failed to empower to give; we are robbing them of their dignity in order to feed them. I don’t know what the answer is — if I had a better solution, I’d be pushing for it. I pray that God will give us one.

Until the New Jerusalem comes in for a landing and heaven has officially come to earth, there will be room for improvement. Let’s seek all the improvement that God will give us.

You might also enjoy the other posts in this month’s synchroblog:

This entry was posted on Monday, August 24th, 2015 at 12:13 pm and is filed under Meditations, synchroblog. You can follow any responses to this entry through the RSS 2.0 feed. Both comments and pings are currently closed.