In John 15, Jesus presents His followers with a vineyard as a metaphor for living in harmony with God. Jesus is the vine, all His people are branches, and–this part is much neglected–the Father is the caretaker.

The traditional 3DM rendering of this passage uses a semicircle, a pendulum that oscillates back and forth between seasons of fruitfulness (work) and seasons of abiding (rest). While it’s true that there’s a need to maintain healthy rhythms of work and rest (a lesson contained in Genesis 1 and a number of other places in the Bible), this passage is actually headed a different — and far deeper — direction.

The first necessary modification to the 3DM picture was suggested by one of my coaches, Jeff Allen. He moved “abide” from one of the extremes on the pendulum to the pivot point, thus: 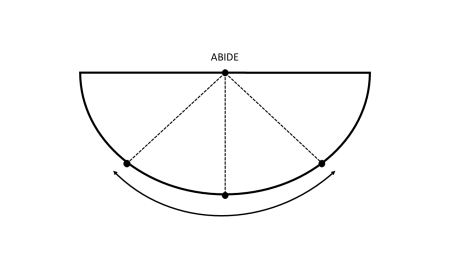 There’s another tweak we have to make in order to understand the passage properly, and that is a correct understanding of the Greek word airo, that is so often translated “He takes away” in v. 2. Airo means to lift up or take away, and so that translation is understandable…but absolutely wrong in this context. The word also means “to lift up,” and in this context, that’s much more to the point.

The conversation here is about the care of a vineyard. At the beginning of the growing season, the caretaker passes through the vineyard, looking for threats to fruitfulness. There are two conditions, not just one, that threaten the fruitfulness of the vines: too much growth, and not enough.

Where the branches are growing too much, they won’t produce good-quality fruit. If a branch is trying to produce too much fruit at the same time, it won’t have the nutrients it needs to make good-quality fruit, so all of the fruit will be stunted and poor. At the other extreme, some branches fall down into the dirt. Down in the dirt, they are in danger, threatened by rot, mildew, and pests. 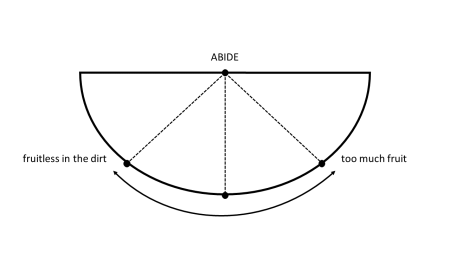 The branches that are overactive, spreading themselves too thin, get pruned back. In other words, God will cut off some of what you are trying to do, in order to get you to focus all your resources in a smaller, more productive area. That is really hard to take, especially when some of the things God prunes off are things you worked really hard for. They may be good things, but if God is not authoring them for you, now, then it’s time to let them go. The job here is to accept the Father’s pruning with grace, and trust that He knows what He’s doing.

Then there’s the branches that have fallen into the dirt and aren’t producing anything…and this is where that Greek word comes in. “Every branch in me that does not bear fruit He lifts up.” The caretaker lifts the fallen branch back up onto the trellis where it can thrive in the air and sunlight. If you have fallen into the dirt, and you’re not producing anything, your job is to let the Father lift you up, so that you might bear fruit.

This entry was posted on Tuesday, September 1st, 2020 at 6:00 am and is filed under 3DM, Exegesis. You can follow any responses to this entry through the RSS 2.0 feed. Both comments and pings are currently closed.